BRIDGEWATER, NJ. (YC) – President Trump had a round table discussion at his golf club Tuesday in Bedminster, New Jersey.

“The best way to prevent drug addiction and overdose is to prevent people from abusing drugs in the first place,” Trump stated. “If they don’t start, they won’t have a problem. If they do start, it’s awfully tough to get off.”

The average sentence for a drug offender decreased 20 percent from 2009 to 2016.

According to the American Journal of Preventative Medicine, Pennsylvania’s opioid drug and heroin death rates are among the worst in the nation.

Currently, Pennsylvania’s heroin death rate is ranked #4 in the country with the previous rank being 20th.

“In Pennsylvania, we’ve seen that this epidemic does not see Republican or Democrat,” Gov. Wolf said.

“The President’s commission has laid out a robust and reasonable plan for the federal government to be a better partner with states on combating the heroin and opioid crisis.”

Local Pennsylvania counties such as Delaware have rolled out plans using as many resources they can gather.

According to the Delaware County Daily Times, DelCo formed a Heroin Task Force, expanded treatment and educational resources, established new courts and programs for minor drug-related offenses, imposed a “Good Samaritan” provision that forgoes prosecution for overdosing addicts and supplies every police force with Narcan, a life-saving emergency nasal spray that can stop or reverse the effects of an overdose. 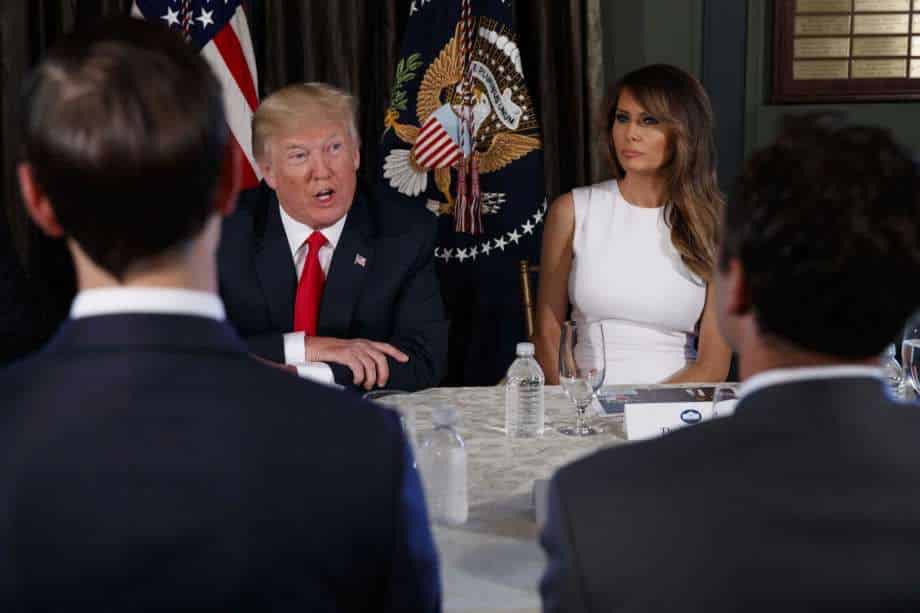 “After his briefing today, I urge President Trump to move swiftly to get these recommendations into action,” Gov. Wolf continued. “Too many families are being torn apart by this epidemic and it is causing real pain for law enforcement, health professionals and all of our communities.”

Inside the Meeting ›› Statements from Trump

“Today I’m pleased to receive a briefing from our team on ways we can help our communities combat this absolutely terrible epidemic and keep youth from going down this deadly path. The best way to prevent drug addiction and overdose is to prevent people from abusing drugs in the first place. If they don’t start, they won’t have a problem. If they do start, it’s awfully tough to get off. So if we can keep them from going on and maybe by talking to youth and telling them: No good, really bad for you in every way. But if they don’t start, it will never be a problem.”

“We’re also working with law enforcement officers to protect innocent citizens from drug dealers that poison our communities — strong law enforcement is absolutely vital to having a drug-free society. I have had the opportunity to hear from many on the front lines of the opioid epidemic, and I’m confidant that by working with our healthcare and law enforcement experts we will fight this deadly epidemic and the United States will win. We’re also very, very tough on the southern border where much of this comes in, and we’re talking to China, where certain forms of man-made drug comes in and it is bad. We are speaking to other countries, and we’re getting cooperation. But we’re being very, very strong on our southern border — and I would say the likes of which this country certainly has never seen that kind of strength.”

“It’s a tremendous problem in our country, and I hope we get it taken care of as well as it can be taken care of. Hopefully better than any other country that also has these same problems. Nobody is safe from this epidemic that threatens all — young and old, rich and poor, urban and rural communities. Everybody is threatened. Drug overdoses are the leading cause of accidental death in the United States.”

“At the end of 2016, there were 23 percent fewer federal prosecutions than in 2011, so they looked at this surge and they let it go by. We’re not letting it go by. The average sentence for a drug offender decreased 20 percent from 2009 to 2016. During my campaign, I promised to fight this battle because as President of the United States my greatest responsibility is to protect the American people and to ensure their safety, especially in some parts of our country, it is horrible.”