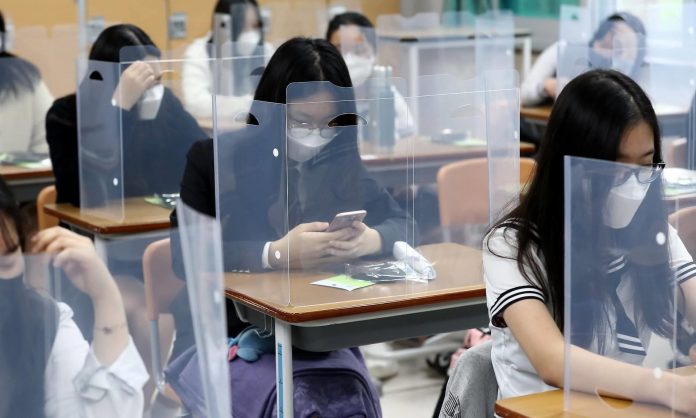 South Korea has been forced to re-close 251 schools amid a dramatic spike in coronavirus cases.

A total of 2.37 million children were allowed back to the classroom on Wednesday after months of online learning, but two days later 251 schools in Bucheon, west of Seoul, have been forced to close again.

It comes amid an outbreak of cases traced back to a warehouse run by South Korea’s biggest e-commerce firm, Coupang, in Bucheon, according to the BBC.

The country had been praised for its early intervention of the virus, which has caused 269 deaths since the outbreak began earlier this year.

Traces of Covid-19 have been detected on the soles of distribution workers’ shoes and on clothing. One student, whose mother is an employee of the centre, tested positive for the virus.

‘We’ll take every measure we can take until safety is confirmed,’ a Coupang spokeswoman said.

Citizens were also advised to refrain from social gatherings or going to crowded places – including restaurants and bars – while religious facilities were asked to be extra vigilant with quarantine measures.

‘If students can’t return to school under the current prevention regime there might be no offline schools at all this year,’ Ms Yoo warned during a meeting a a government complex in Sejong earlier this week.

Authorities decided to temporarily close all schools in their neighbourhood as students there may have come in contact with the infected students earlier, a spokesman at the Incheon Metropolitan City Office of Education said.

Across the world thousands of students have been making a cautious return to schools with countries such as Germany, Canada, Australia, China, Switzerland, Denmark, Greece, the Czech Republic, Cyprus and Israel allowing schools to reopen with measures including splitting classes in half and teaching them at different times of the day to keep pupils safe.

Scientists are divided on the risks of sending children back to school – while they largely escape coronavirus symptoms they are known to be carriers of the disease and there are fears they will infect adults around them.

But restarting classes will be key to getting the global economy back up and running since parents who are forced to keep their offspring at home will be unable to return to their jobs.

There are also fears it will cause lasting economic damage for a ‘lost generation’ whose learning will be irreparably damaged by being kept away from their teachers, leading to a skills shortage in the future.