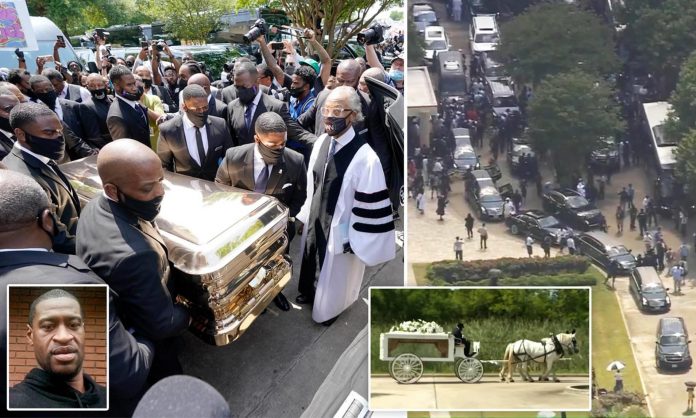 GEORGE Floyd’s golden casket is on its way to its final resting place following a powerful funeral service in Houston, where loved ones shared their memories and community leaders demanded his death lead to widespread change.

Nearly 500 guests including stars like Jamie Foxx, actor Channing Tatum, NFL star J.J. Watt and Congressman Al Green attended the funeral service at the Fountain of Praise Church, the culmination of a long farewell to the man whose death has rocked America and fueled calls for police reform.

The funeral was guarded by the brothers with the Nation of Islam and the Houston police department.

The Nation of Islam has grown into one of the wealthiest and best-known organizations in black America.

As of Tuesday morning, fences were placed along Cullen Boulevard to allow people to pay their respect to Floyd.

Following the gathering, Floyd’s body was carried home in a horse-drawn carriage and laid to rest next to his mother at the Houston Memorial Gardens in Pearland.

City officials closed the streets within a mile of the cemetery, but supporters can still watch the procession.

Floyd’s body, dressed in a brown suit, lay in an open gold-colored casket. Shortly after the memorial ended, Floyd’s casket was placed in a hearse and escorted by police back to a funeral home.

Texas Gov. Greg Abbott was one of over 6,300 people who attended his public viewing ceremony Monday at Fountain of Praise Church.

The funeral services comes after five days of public memorials in Minneapolis, North Carolina and Houston.