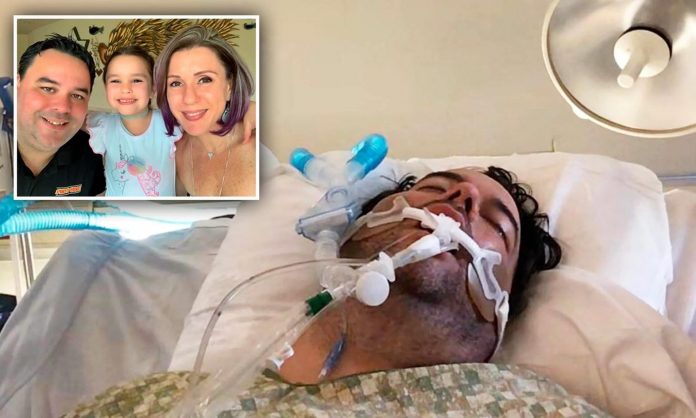 A FLORIDA father is fighting for his life after contracting coronavirus from his son, who tested positive after ignoring his parents’ advice to stay home and adhere to social distancing guidelines, Your Content can report.

What’s more, the son infected his whole family with COVID-19

John Place, from Plantation, is currently in the intensive care unit at Westside Regional Medical Center where he was put on a ventilator for more than two weeks.

The 42-year-old and his family all tested positive for COVID-19 last month after his 21-year-old son went out with friends one night and unknowingly brought the respiratory virus back to their home.

His wife Michelle Zymet said she had repeatedly pleaded with her stepson, who was not named, to avoid going out with friends and to always wear a mask.

Place remains in the hospital after being admitted more than three weeks ago, according to local reports.

“He always assured me, ‘Don’t worry, mom. I’m doing everything right, relax, chill.’ You know how these kids are, so I trusted in him,” Zymet told 7 News Miami.

She said she begged him to think about his dad, who is at a higher risk of severe COVID-19 illness because he is overweight and diabetic.

But despite her pleas, he went out against her wishes one night in June, when he gathered with friends and removed his mask while eating and drinking.

Days later, he felt cold symptoms and a friend at the get-together told him she had tested positive for coronavirus. By then, it already had taken hold in the young man’s household.

“You let your guard down just one time, it’s all it takes,” Zymet added. “You come home, and you infect the entire house.”

The disease quickly spread among members of the family highlights the outcome dreaded by authorities who feared the recent surge of cases hitting younger Floridians would spread to older, more vulnerable people.

‘They don’t necessarily listen. It could be peer pressure,’ Zymet said.

“Maybe they think, ‘None of us are sick. We are fine.’ They don’t understand many of us are asymptomatic and are positive carriers of the virus.”

The young man, who did not want to talk to the media, had told his father and stepmother that he initially thought he had a common cold and took over-the-counter medication.