How President Trump Will Restore LAW AND ORDER in America
H 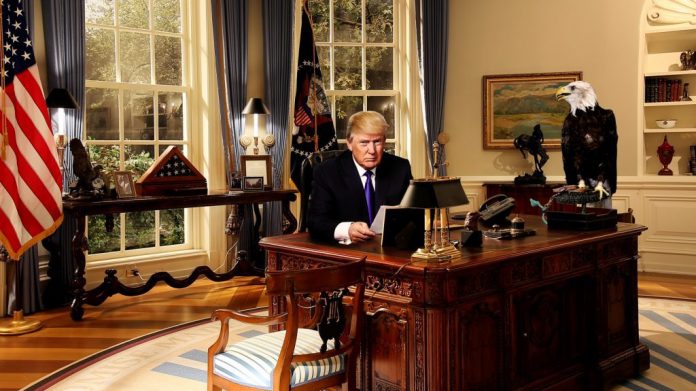 President Donald J. Trump has made a commitment to end lawlessness in the United States — rolling out a no-nonsense plan to defeat the ongoing crime spike, Your Content can report.

“America needs creation, not destruction; cooperation, not contempt; security, not anarchy; healing, not hatred; justice, not chaos. This is our mission, and we will succeed.” President Donald J. Trump declared Wednesday night as he rolled the plan out.

Through this action, the United States will explore avenues to ensure Federal funds are spent to uphold the President’s promise to protect life, liberty, and property, the White House revealed Wednesday night.

According to the White House, the Department of Justice, in consultation with other Federal agencies, will consider a number of factors, including whether the city defunded the police or prevented local law enforcement from intervening to restore order.

What’s more, the Trump Administration will hold lawless jurisdictions accountable by reviewing Federal funds provided to them, restricting their eligibility for certain Federal grants where permissible, and working to redirect those funds to jurisdictions that protect communities.

SECOND, President Trump’s actions will help ensure that Americans’ hard-earned taxpayer dollars are not wasted by lawless governors and mayors.

According to the White House, federal taxpayer dollars provided to States and localities each year are being wasted by reckless policies and the destruction of property in cities across our Nation.

So far, violence across the country has cost taxpayers millions of dollars in damages to Federal office buildings, and dozens of Federal officers have been injured, the Trump Administration revealed.

Portland recently cut the police divisions for shootings and transit violence, despite receiving hundreds of millions in grants to fund public resources such as transit and law enforcement.

According to the feds, as shootings skyrocket in New York City, local officials have agreed on a budget that shifts nearly $1 billion of police funding to other agencies.

By identifying funds that may be redirected from jurisdictions where local politicians have permitted anarchy and violence to abound, President Trump is ensuring Americans are no longer forced to foot the bill for local politicians’ dereliction of duty, the White House said.

THIRD and foremost, President Trump is supporting law enforcement and restoring law and order across the Nation.

According to the White House, President Trump has promoted policies that improve law enforcement and make our communities safer.

Earlier this year, the Department of Justice launched Operation Legend to surge Federal resources to cities and jurisdictions plagued by violence and crime.

In 2017, the Trump Administration revitalized Project Safe Neighborhoods to bring together communities and law enforcement at all levels of government to reduce violent crime.

According to the White House, President Trump’s bold leadership led to passage of the historic First Step Act, a landmark restructuring of the criminal justice system that promotes fairness and safer communities.

The President has reversed the wrongheaded policy that stopped the provision of surplus military supplies to local law enforcement, the administration revealed.