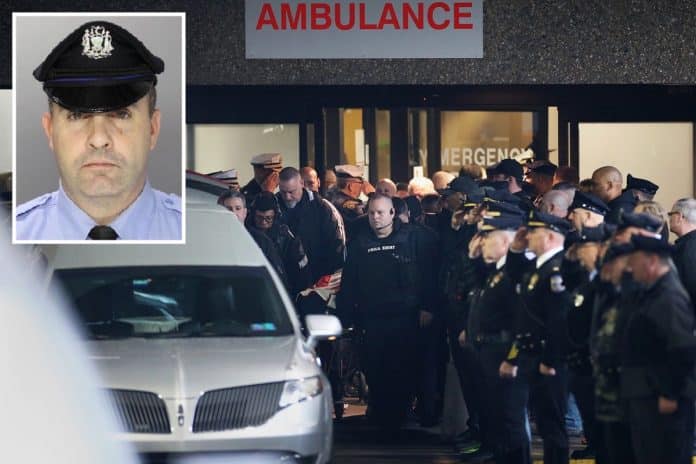 The men accused of executing a decorated Philadelphia Police Officer ‘are eligible’ for the death penalty if found guilty, Your Content has learned.

Police Commissioner Danielle Outlaw said that the team was raiding a home on Bridge Street near Duffield Street in the Frankford neighbourhood.

Someone opened fire through a closed door on the second floor at 5:51 a.m., striking the veteran corporal in the shoulder.

During a news conference outside the federal courthouse on Dec. 10, U.S. Attorney McSwain discussed the charges in the seven-count indictment.

Court filings reveal that the suspected cop killers are members of a violent drug trafficking group known as “1700 Scattergood,” which operates in the Frankford section of Northeast Philadelphia.

The miscreants allegedly sold narcotics from a stash house they maintained where they kept an arsenal of weaponry, drugs and drug paraphernalia.

As Your Content reported on March 13, 2020, the trio was inside the stash house property in the 1600 block of Bridge Street when Sergeant O’Connor and other members of the Philadelphia Police Department’s SWAT team arrived with arrest and search warrants.

As Sergeant O’Connor and his fellow officers ascended the staircase to the second floor of the residence and announced their presence multiple times, Elliott allegedly fired a semi-automatic assault rifle 16 times, striking and killing Sergeant O’Connor.

A subsequent search of the property revealed the scope of the defendants’ alleged drug trafficking conspiracy: ten firearms, bulk and packaged “crack” cocaine, bulk and packaged marijuana, and items commonly used to package and sell narcotics, such as a scale and packaging materials.

“The murder of a police officer is one of the most agonizing things that a community can experience, and my heart goes out to the O’Connor family. Sadly, this year has already seen more shootings in Philadelphia than in any other year – ever,” said U.S. Attorney McSwain. “In order to address this epidemic of violence in our city, we must have the courage to tell the truth.

“The truth is that, as a practical matter, District Attorney Larry Krasner’s pro-violent defendant policies are what kept Hassan Elliott on the street; they put this horrible chain of events in motion; and in that sense, they are every bit as responsible for Sergeant O’Connor’s alleged murder as the defendants.

“While we cannot bring Sergeant O’Connor back, we can honor him by seeking justice and doing all that we can to prevent this type of tragedy from occurring again.”

“This indictment shows ATF’s commitment to working with our local, state and federal partners to help diminish the violent crime that continues to plague Philadelphia,” said Matthew Varisco, Special Agent in charge of ATF Philadelphia’s Filed Division. “I commend the hard work of the investigators and detectives of the Philadelphia Police Department that made these charges possible and that hopefully will prevent another potential crime or death. I also thank the U.S. Attorney’s Office for their guidance and work prosecuting this case.”

This case is part of Project Safe Neighborhoods (PSN), a program bringing together all levels of law enforcement and the communities they serve to reduce violent crime and make our neighborhoods safer for everyone.

The Department of Justice reinvigorated PSN in 2017 as part of the Department’s renewed focus on targeting violent criminals, directing all U.S. Attorney’s Offices to work in partnership with federal, state, local, and tribal law enforcement and the local community to develop effective, locally-based strategies to reduce violent crime.

If convicted, the gang members face a maximum possible penalty of lifetime imprisonment.

However, contained within the indictment is a Notice of Special Findings for defendant Elliott with regard to the charge of murder while using or carrying a firearm. This Notice makes Elliott eligible for the death penalty.

Cpl. O’Connor was 46- years-old, a 23-year veteran of the Philadelphia Police Department, and was assigned to SWAT for 15 years.

He was a married father of two. His son is currently a 9th District police officer and his daughter serves in the Air Force.