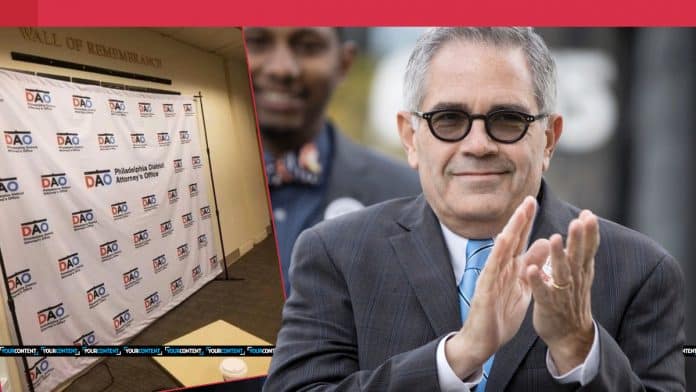 Philadelphia’s daring district attorney hung a backdrop over the names of fallen police officers to hold a news conference, Your Content has learned. This comes just after a local television station defamed the department’s shield on a live telecast.

The “Wall of Remembrance” that features plaques honoring some 200 hero cops who died in the line of duty was covered up Friday for a news conference, photos obtained by Your Content depict.

The Wall of Remembrance is located on the mezzanine level outside the Ray Harley Conference Room at the D.A.’s office at 3 S. Penn Square, reports BigTrial.net, who was first to break the story.

“A fucking disgrace,” one cop told the publication. “Here’s what Krasner thinks of cops who have died in the line of duty,” texted another cop who sent along the photo at right.

In the photo, the wall is covered with a sheet that bears repeated images of DAO logo of the Philadelphia District Attorney’s Office.

The Philadelphia District Attorney’s race is heating up, with incumbent Larry Krasner and Democratic challenger Carlos Vega both posting six-figure hauls months out from a likely decisive primary contest.

The Philadelphia Inquirer reported Krasner starred in a documentary series showcased at the 2021 Sundance Film Festival on Feb. 2 and 3.

The publications reports a film crew was granted inside access four years ago to Krasner’s campaign and then his first term.

“A lot of reforms, like our marijuana policy, I could have just enacted on my own as part of my prosecutorial discretion,” Stollsteimer told The Philadelphia Citizen. “But I didn’t want to impose a policy. Lasting change in politics happens through collaboration. So we all sat down together and worked out how to best serve the citizens.”

Chuck Peruto, a Democrat-turned-Republican defense attorney is also seeking to defeat Philadelphia District Attorney Larry Krasner’s bid for a second term, casting him as an outsider who goes easy on criminals, the Inquirer revealed on Feb. 9.

“I wanted to do it in front of our Justice Center and the revolving doors behind me because that’s a symbol of our Justice Center,” Peruto said. “In and out, people laughing, (saying) ‘Beat my case. It was a layup,’ things like that. This city is a disgrace We have a public defender disguised as a district attorney.”

Peruto says that everyone in the city is impacted by gun violence and pinned the blame on Krasner during his formal announcement.

“The reason why I’m running is very simple,” Peruto writes on his campaign website. “Our City is overridden with bullets flying by every section of this great City from top to bottom.”

“Public safety is my number one concern, and other matters that a District Attorney should normally be concerned about, must take a back seat to this problem.”

Also on the ballot for the primary is Democratic candidate Carlos Vega, a career prosecutor who was the first Latino homicide prosecutor in Pennsylvania.

Carlos was the first Latino homicide prosecutor in Pennsylvania and has prosecuted over 400 cases in his 35 years at the DA’s office, his campaign website says.

“This race is special. It means the difference between our city crumbling as it is, mothers crying because every day a mother gets a call saying ‘your baby was killed,’” Vega told NBC 10. “Every shooter who is still on our streets and has not paid their debt to society is a policy failure of the current administration.”