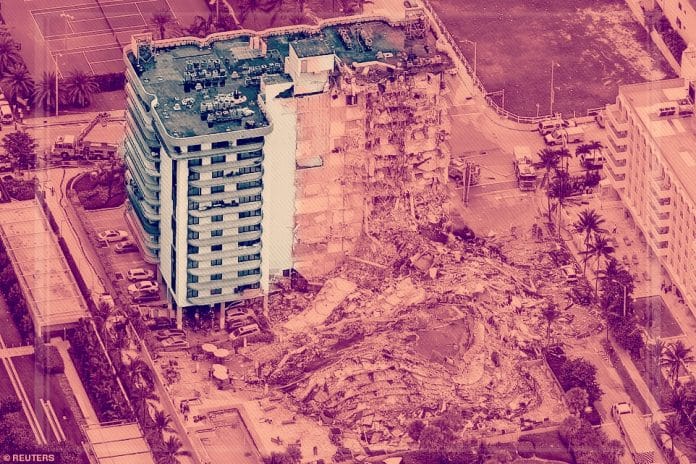 Authorities on both the state and federal level are investigating a beachfront condominium catastrophic collapse Thursday that left at-least four dead and 159 others unaccounted for, and a source tells Your Content exclusively that agents from the Florida Bureau of Investigations and Intelligence—in addition to agents from the FBI Miami Division—are probing what triggered the tragedy.

“When an occupied residential building collapses on American soil—it certainly warrants a full blown investigation by the United States Government,” the source close to the investigation told Your Content. “The FBI is taking full advantage of all resources available to them.”

“It appears there are more pieces to this puzzle—each day everyone learns something new about the complex’s history—and the investigation will unravel any corners that may have been cut or warning signs ignored.”

What’s more, a staff member of the building told Your Content Friday she had been asked questions by federal agents.

“The questions were pretty generic, they didn’t ask about our management per se—but they wanted to know about our complaint protocols and how we handle complaints of safety.”

The staffer spoke under the condition of anonymity in fear of retribution from her employer.

“This building was on the brink of collapsing. Last week it was an inside joke; now it’s real life and we’re speechless.”

Florida Gov. Ron DeSantis signed an emergency declaration for Miami-Dade County late on Thursday that will provide assistance from the Federal Emergency Management Agency to those dealing with the high-rise building collapse. The emergency declaration came after President Joe Biden said the agency had been sent to Florida and offered help from the federal government in recovering from the disaster.

Horrifying surveillance footage, obtained by WSVN, captured the moment the building collapsed, sending a huge cloud of debris into the air and officials said the level of destruction made it seem like a ‘bomb went off’.