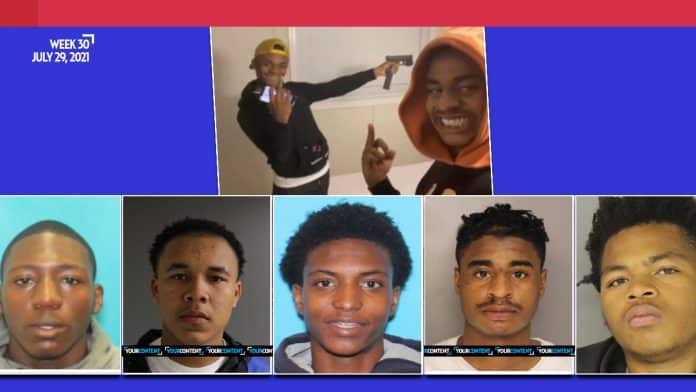 A group of Delaware County gang members were nabbed early Thursday morning after sharing bizarre photos on social media depicting the men at birthday parties flashing guns, Your Content is first to report.

District Attorney Jack Stollsteimer announced the arrest this morning of multiple individuals affiliated with the MML (“Money Making Legends”) gang after an investigation into shootings and other acts of violence in the communities of Folcroft, Sharon Hill, Collingdale and Darby Borough. The investigation was conducted by a joint task force involving officers and detectives from the Sharon Hill, Darby Borough, and Folcroft police departments.

“We promised those residents action. Today we delivered on that promise – we have taken a dangerous gang off the streets, and prevented what we believe to be imminent acts of even more serious violence. I want these arrests to be a warning to those who engage in these senseless crimes. If you commit violent crime in Delaware County, law enforcement will use every resource to bring you to justice,” said DA Stollsteimer.

Additional charges are expected to be filed at the conclusion of the forensic examination of evidence gathered during today’s sweep.

Arrest warrants have also been issued for MML gang members Al Coffee, Shadeen Hargrove, Eric Beecham, Jakyi Hooks, and Nathan Bundy. The District Attorney encourages those individuals to turn themselves in, and asks for the public’s assistance in locating them.

If you know something that might assist in this investigation, please contact Detective Corporal Vincent Port at the Sharon Hill Police Department at (610) 237-6200.

“Today’s sweep has struck a blow at the MML gang, which has terrorized my community, as well as the communities of Collingdale, Folcroft, and Sharon Hill,” said Darby Police Chief Joseph Gabe. “Interrupting gang violence of this sort requires cooperation and collaboration, as well as tremendous patience, but as today’s arrests make clear, it can be done,” said Gabe.

Sharon Hill Police Chief Richard Herron added, “This investigation is a perfect example of multiple agencies coming together and working hard to end the violence in their towns. By coming together these agencies were successful in taking down several violent individuals that have terrorized these communities for far too long.

“The residents of our communities can rest easy knowing these individuals are behind bars and numerous firearms have been taken off the streets. We would like to thank the District Attorney’s office and all agencies that assisted with the investigation and today’s operation.”

“While today’s arrests were truly the result of a team effort, I feel it is important to acknowledge the extraordinary efforts of several individuals. Detective Corporal Vincent Port of the Sharon Hill Police Department, Officer Christopher Izzi of Darby Borough, and Deputy District Attorney Laurie Moore worked tirelessly for many months to build this case and remove these dangerous individuals. On behalf of the residents of the affected communities, I want to express our deep appreciation for the work they do every day to keep us safe,” Stollsteimer added.