The madman wanted in connection to a Delaware County homicide is now holding a standoff with police in New Jersey after fleeing the Philadelphia region. 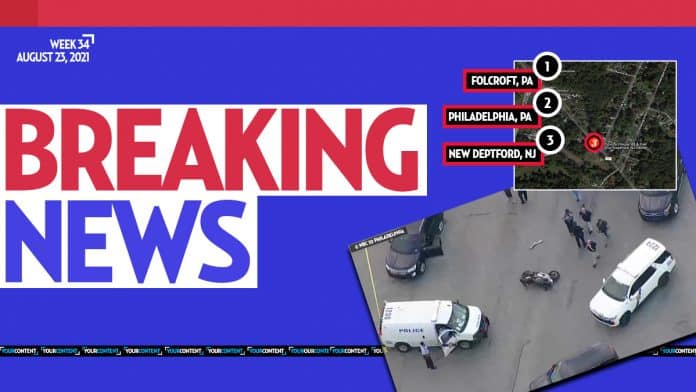 The madman wanted in connection to a Delaware County homicide is now holding a standoff with police in New Jersey after fleeing the Philadelphia region with a stolen unmarked police Tahoe loaded with SWAT gear and guns, Your Content is learning.

According to law enforcement sources, the gunman is in the area of Oak Avenue and County House Road in New Deptford, New Jersey, shooting at police.

The assailant is wearing stolen SWAT gear he obtained from the police SUV taken from an earlier police shootout.

Your Content readers were first to know that police in the Philadelphia region swarmed Folcroft Township after an armed gunman shot at police and stole their SUV loaded with rifles and SWAT gear.

Troopers from both Pennsylvania and New Jersey State Police zeroed in on the perpetrator shortly after 7:30 p.m., Your Content previously reported.

The man is described as a black male, 6’4 approximately 230 pounds wearing SWAT gear.

Though law enforcement recovered the guns in the stolen police Tahoe, the suspect has his own arsenal, according to sources briefed on the situation.

__
This is a developing breaking news story. Stay with Your Content for the latest developments as they unfold.