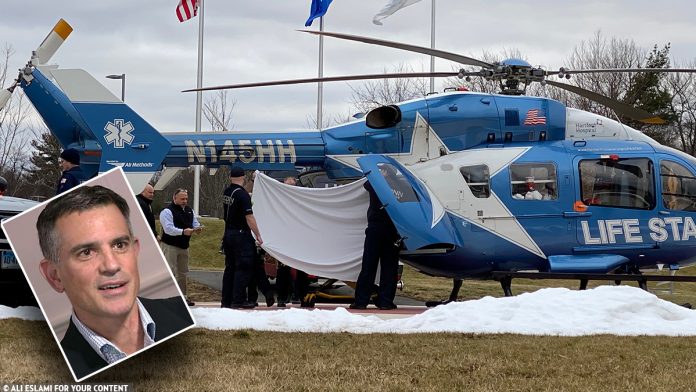 Fotis Dulos was revived after a suicide attempt at his Farmington estate Tuesday morning. He is being transported to Jacobi Medical Center in the Bronx for an “emergency procedure,” a source close to the investigation told Your Content.

“Mr. Dulos is on life support and headed to Jacobi Medical in NY,” the source said under the condition of anonymity. “He attempted to commit suicide by closing his garage door and leaving his vehicle on.” The source noted Dulos’ children are expected to visit him.

A Connecticut man accused of killing his estranged wife and the mother of their 5 children, Jennifer Dulos, was found dead in an apparent suicide, a person familiar with the case saidhttps://t.co/ygLSoQhlV1

Authorities swarmed Dulos’ Farmington estate at approximately 11:45 a.m. Tuesday after he failed to appear to court for a last-minute bond hearing. When officers arrived, they saw what appeared to be a Dulos in his garage sitting inside of his running vehicle.

“Mr. Dulos had no pulse for several minutes,” a source close to the situation previously told Your Content. “Legally, he was dead. Mr. Dulos will likely suffer permanent brain damage as a result of the carbon monoxide poisoning and revival.”

Officers forced entry and performed life saving measures. He was declared dead at one point, but later revived at a nearby hospital.

“I don’t know that people who’ve not been accused can appreciate the savageness of the criminal justice system. We have a presumption of innocence in this country for a reason,” Pattis said.

“All the folks who harped on Mr. Dulos can obviously take some grim satisfaction in todays event but my message to each and every one of them is shame on you.”

News outlets from across the nation, including The New York Times, reported that Dulos died from an apparent suicide on Jan. 28. According to sources close to the situation, he was revived after “extreme lifesaving measures.”

Jennifer Dulos vanished on May 24 after dropping her five children off at school. But “to date, the whereabouts of Jennifer Dulos is unknown,” according to the arrest warrants.

On June 1, the case garnered international attention when Fotis & his former mistress-turned-girlfriend, 44-year-old Michelle Troconis, were arrested and charged with hindering prosecution and tampering with physical evidence in connection to the mother-of-five’s disappearance.

Authorities previously said they located video surveillance that appeared to show the two dumping bags of evidence, including blood drenched sponges, clothing, and other material, at over 30 locations in a four-mile radius. But ultimately police only located a fraction of what was originally heavily speculated, according to the charging documents.

Their short-lived release was cut short on Jan. 7, 2020, when Fotis & Michelle were re-arrested for charges pertaining to the alleged murder of Jennifer Dulos. 52-year-old Kent Mawhinney, a Connecticut based attorney, was also arrested and charged in connection to the disappearance of the mother-of-five.

Troconis was released from custody after posting $1.5m bond. She was transported to a local hospital after sources say she suffered from “mental and/or heart issues.”

Mawhinney remains in jail on $2m bond. Fotis was released on $6m bond and placed under house arrest pending the outcome of the trial.

“We categorically deny that Mr. Dulos had any involvement in the disappearance of his wife Jennifer and we defy the state to prove she is in-fact dead. As far as we’re concerned Mr. Dulos is not guilty,” Norm Pattis told reporters during a news conference outside of his New Haven law office. “The warrants come as a great relief to us because after month of listening to innuendo suggestion and rumors we have something to shoot at and we intend to start firing those shots at Mr. Dulos’ bond hearing tomorrow morning.”

“The state of Connecticut picked this fight and has twice entered a dagger into the presumption of innocence – so we’ll simply leave it at this: If this is all the state’s got, we wonder why it bothered.” Pattis said.

However, authorities remain stumped as they cannot figure out the whereabouts of Jennifer Dulos.

This is an ongoing investigative special. Stay with yc.news for the latest updates. Have a story or news tip? Contact our 24/7 newsroom at 833.336.8013 or e-mail our tip line: [email protected]