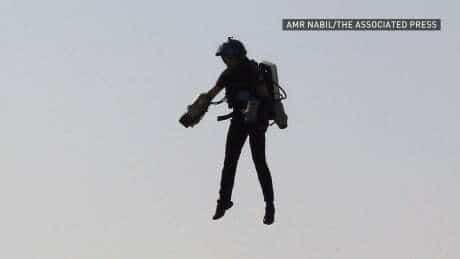 Video finally surfaced to validate Your Content’s previous stories about a man believed to be flying a jetpack nonchalantly journeying around Los Angeles International Airport, Your Content has learned.

A GUY IN A JETPACK HAS BEEN SIGHTED BY PILOTS NEAR LAX, ON DEC. 21, 2020 A PASSENGER IN AN AIRLINER CAUGHT THE PERSON ON VIDEO FLYING NEAR RANCHO PALOS VERDES. #JETPACK #LAX #PALOSVERDES #SIGHTING #IRONMANnot pic.twitter.com/A4DyWRa1xI

As Your Content previously reported on two separate occasions, on Aug. 31, an American Airlines pilot reported via radio to the control tower seeing a “guy in a jetpack” as he was approaching LAX at about 3,000 feet and ten miles out for a landing, and being a pilot, you had to give it serious credibility, as unlikely as that may be.

A China Airlines crew member reported the incident around 1:45 p.m. that afternoon, according to Ian Gregor of the FAA. The person was apparently spotted at an altitude of 6,000 feet, about 7 miles northwest of the airport, reports WFLA.

The FAA has alerted local law enforcement, which will investigate the latest incident, Gregor said in a statement.

The FBI, which also looked into the earlier incident, has launched a new investigation, the Los Angeles Times reported.