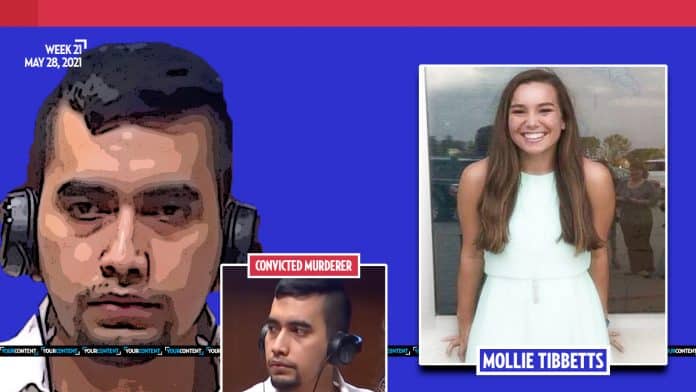 Convicted killer Cristhian Bahena Rivera nodded his head in agreement as an Iowa jury found him guilty of first degree murder for the brutal slaying of University of Iowa student Mollie Tibbetts, video examined by Your Content reveals.

Cristhian Bahena Rivera was found guilty of killing the 20-year-old University of Iowa student in July 2018 and hiding her body in a cornfield, sparking a monthlong manhunt that drew international attention.

The cold-blooded killer was captured simply nodding his head when the verdict was read by the jury foreperson, a snippet from the proceeding appears to indicate.

A head nod is most commonly used to indicate agreement, acceptance, or acknowledgement.

Your Content spoke exclusively to Susan Constantine, a behavioral health expert and often relied on for her expertise in high profile criminal cases who said the head nod translates to Bahena Rivera ‘subconsciously’ saying ‘you got it right.’

“The head nod was a yes, you got it right (subconsciously),” Constantine explained in an exclusive comment to Your Content.

“Rivera was in agreement, and expected it. He and his attorneys were also stoic.

“Never looking at Rivera or providing support. It was inevitable and expected.”

In the US, we think it’s universally known that shaking your head from side to side clearly means “No,” while nodding the head up and down means “Yes.” The same goes for China, Canada, Mexico, and most parts of Western Europe, Africa and the Middle East.

The jury of five women and seven men deliberated about three hours on Thursday and about four hours on Friday, according to a pool report.

Your Content was first to break the news as the jury found Cristhian Bahena Rivera guilty for the kidnapping and brutal murder of University of Iowa student Mollie Tibbetts, who vanished in July 2018 while on a routine jog in her hometown of Brooklyn, Iowa

The verdict comes nearly three years after the body of the 20-year-old woman was found in an Iowa cornfield.

The panel deliberated for a little over three hours before calling it a day Thursday, reconvening early Friday morning.

The trial on his first-degree murder charge began last week. On Wednesday, the defense rested its case after Bahena Rivera took the stand in his own defense to testify that two masked men had killed Tibbetts, forced him to transport her body in his car, and threatened his family to keep him silent.

Bahena Rivera, a 26-year-old undocumented immigrant from Mexico, admitted in an August 2018 interview with police that he followed Tibbetts while she was out for an evening run, got angry at her and “blacked out,” according to an arrest affidavit and testimony at trial.

He said he later came to and realized she was bleeding in his vehicle’s trunk and then buried her in a remote Iowa cornfield, prosecutors said.

The mandatory sentence in Iowa for first-degree murder is life in prison without the possibility of parole, the Register reported.

A sentencing hearing is scheduled for July 15 at the Poweshiek County Courthouse in Montezuma, Iowa, according to the newspaper.

Tibbetts was jogging on July 18, 2018, and never returned, according to the Register.

Her disappearance sparked a monthlong search that ended when Rivera, an undocumented immigrant from Mexico, led investigators to a rural cornfield where they found Tibbetts’ body with fatal stab wounds.

“(Tibbetts’ family) are relieved. They’re pleased with the verdict,” prosecutor Scott Brown told KCCI. “The family of Mollie Tibbetts is a great bunch. They’ve been awesome to work with and the circumstance of course is always very tragic… They’ve been very supportive of everything we’ve done. We just wish them the best moving forward.”