By Jonathan Lee Riches
Modified May 13, 2021
January 22, 2021
Clarifications and Corrections

Please see a Your Content Correction Notice (1.28.21) located at the bottom of the article. 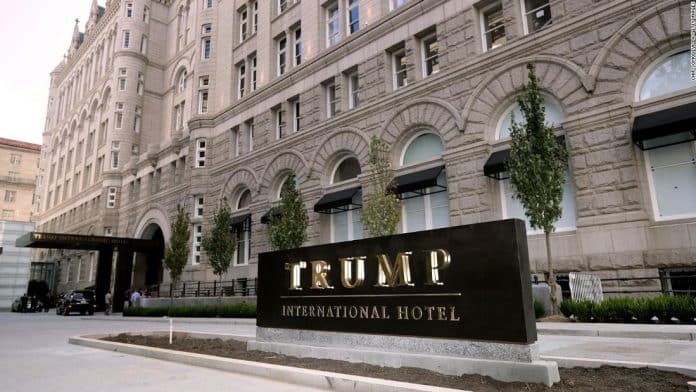 Former President Donald J. Trump informed soldiers they were welcome to stay at Trump Hotel in D.C. free of charge after he heard lawmakers evicted them from the Capitol and forced them to sleep in vacant parking lots, Your Content has learned.

“President Donald J. Trump has given permission for the troops to stay at Trump Hotel DC if any of them need,” an aide of the former president told Your Content. “The hotel will accommodate the troops at no cost.”

The former president’s eldest son, Donald Trump Jr., also announced the hotel will welcome police officers in the area a place to relax—calling out ‘unbiased’ members of the media for asking ‘zero questions’ about the situation to President Joe Biden’s press secretary.

“Trump DC hotel open for DCPD. Strange the our wonderful & totally unbiased press corps had ZERO questions for pres sec on Nat’l Guard troops being move out of a congressional building into an open cold garage,” tweeted Donald Trump Jr.

“If Trump were pres they would be ‘outraged.’”

Former White House Press Secretary Kayleigh McEnany confirmed with Your Content that members of the National Guard were welcome to stay at President Trump’s D.C. hotel.

As Your Content readers know, politicians from both the Republican and Democratic parties treated U.S. troops ‘worse than a one night stand’ after using them for protection during the inauguration—only to evict them into vacant parking lots shortly thereafter to sleep.

“For the last week my battalion has been sleeping on the floor in the Senate cafeteria.” a military source told Benny Johnson.

“Today the Senate kicked us out & moved us to a cold parking garage. 5000 soldiers. 1 power outlet. One bathroom. This is how Joe Biden’s America treats solders.”

He continued: “Yesterday dozens of senators and congressman walked down our lines taking photos, shaking our hands and thanking us for our service.

However, the National Guard vehemently denies having knowledge of any invitation by former President Donald Trump allegedly welcoming troops to stay at the hotel, according to PolitiFact.

“The National Guard said it is not aware of any offer by Trump to provide hotel rooms to Guard members when some were temporarily forced to rest in parking garages after providing security at the U.S. Capitol.” PolitiFact reports.

“No Guard members stayed at the Trump hotel, according to the Guard.”

* CORRECTION NOTICE: This post was updated Jan. 28, 2021 at 12:09 a.m. to include a quote obtained by PolitiFact accredited to the National Guard vehemently denying having knowledge of an invite by former President Donald Trump to members of the National Guard. An unnamed National Guard spokesperson also told PolitiFact there were no guard members who stayed at the Trump Hotel.